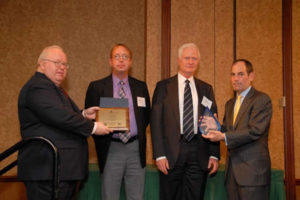 Vessels Carbon Solutions Inc (VCS) formerly Vessels Coal Gas Inc. (VCG) is a Denver-based Colorado corporation formed in 2003 to acquire, develop, and operate Mine Methane Capture (MMC) projects in abandoned and active coal mines in the USA.  The goal was to utilize a wasted resource for low carbon fuel production.  Today the company focuses on destroying the emissions over generating electricity. VCS currently operates two abandoned mine methane projects, one in the North Fork of the Gunnison River Valley of Colorado, and one with Pristine Resources in South Central Pennsylvania.

Vessels Carbon Solutions Inc. was founded by Thomas John Vessels the son of Thomas George Vessels from Enid Oklahoma, a petroleum production pioneer, and 1984 Wildcatter of The Year.  Thomas George had been in turn persuaded to enter the oil business in the 1930s by his father Thomas Eugene Vessels after Thomas Eugene had moved the family to South Texas where they worked as partners for many years.  Thomas George moved to Colorado in 1956 and Thomas J. Vessels began working for his father in 1970 producing oil and gas in Colorado, Texas, and Wyoming .  While working for his father at Vessels Oil and Gas Company, Tom learned about gas production, business management, and honesty.  Striking fair deals and working with regulations instead of around them were cornerstones of the family company.

In 1985 Thomas J. took over Vessels Oil and Gas from his father Thomas G.  He ran the company for several years then sold it in 1996.  Tom formed Vessels Coal Gas Inc with the intent of producing Coal Mine Methane.  Methane is both a climate pollutant and a low carbon fuel.  Tom believed that as more attention was paid to recycling waste, reducing CO2 emissions, and environmental stewardship, leaking coal mine methane could become a priority fuel source.  In 2008 Tom began selling coalmine methane from a very gassy mine in Cambria county Pennsylvania.  However natural gas prices began a steady decline the following year and no new markets emerged prioritizing low carbon fuel.  The closest Tom got was selling REC’s to companies within the PJM Renewable Energy Markets(Coal Mine Methane qualified as renewable in Pennsylvania).  But most emerging renewable markets were already saturated with wind and solar.

Tom was forced to pivot, selling offset credits into the fickle voluntary emission reduction markets.  This was not sustainable as the voluntary market did not make up for the lost revenue incurred by the collapsing gas prices.  In the summer of 2010 Tom was joined by his son Evan and together pursued getting coalmine methane approved in the state of Colorado as eligible for the Renewable Portfolio Standard (RPS).  After two years of lobbying Evan and Tom were successful.  In 2013 a law was passed approving electricity generated from Coal Mine Methane as eligible for the RPS.  Unfortunately Colorado’s renewable market was also saturated with wind and solar energy.  Tom did succeed in finding a market for three Mega-Watts of electricity from Holy Cross Energy due in large part to the support of Randy Udall.  Holy Cross agreed orally to buy the electricity in 2010 prior to the bill granting RPS eligibility to coal mine methane generated power.  That was because they already understood the environmental benefits to generating electricity from waste methane emissions.  No other Colorado utility was motivated to buy additional electricity at a price high enough to be economic.

Fortunately, in 2014, the California Air Resources Board (ARB) decided to approve coal mine methane destruction from active and abandoned mines as a compliance offset for their Cap and Trade System.  Vessels still had to champion abandoned and active coal mine methane  separately and participated in the working group advising on the writing of the Mine Methane Capture Protocol.

Today VCS’s business is to own, build, and operate methane emission abatement projects. Revenue from operations comes primarily from the generation of California Air Resource Board Offset Credits (ARBOCs). This is done by piping the leaking methane to a nearby combustor, where sophisticated measurement devices determine the volume of gas flowing into the combustor, the methane content of the gas, and the temperature of the combustion.

VCS formed North Fork Energy LLC with Oxbow Mining LLC and Gunnison Energy Corporation, for the purpose of producing methane from the Elk Creek Mine complex.  North Fork Energy is generating ARBOCs for sale in the California Cap and Trade System. North Fork has sold offsets to Xcel Energy, and an international energy corporation.

VCS (and independently some of its share holders), Oxbow and Gunnison entered into an agreement with Aspen Skiing Company to own, install, and operate an electricity generating facility to sell the 3 Mega Watts of electricity to Holy Cross Energy under a 15 year power purchase agreement.

Evan Vessels has preformed a number of onsite field surveys with a short range methane detector.  To this day there is still a great del of methane leaking from the mining complex.  These field surveys were submitted to the Colorado Public Utilities Camission along with other documentation demonstrating the projects qualifications for the RPS.  In 2018 the Colorado Public Utilities Commission approved the electricity generated by 3MW for renewable energy credits.

VCS has converted its Pennsylvania operation from natural gas sales to the generation of ARBOCs from combustion.  Evan Vessels sourced the buyer of the carbon offsets for the Pennsylvania project.

VCS was formed in 2003 under the name Vessels Coal Gas, Inc. as a subsidiary corporation of Energy Finance Ltd. (EFL) based in Dublin, Ireland. EFL was formed in 1995 to specialize in the extraction of methane from coal mines. Tom Vessels was an Executive Director of EFL.    EFL transferred its interests in VCG to Energy CG who is now a minority shareholder in VCG.

EFL was a seed investor in Alkane Energy Plc. (ALK). In 1999 through 2000 ALK brought on production 3 abandoned mine sites commercially producing mine methane. Tom Vessels visited all three of these historic projects and met frequently with Alkane management and operations officers.  In 2000 ALK obtained a listing on the London Exchange. In September, 2015, ALK was purchased for over £60,000,000 by Balfour Beatty. It had 27 production sites with over 140 MW electricity generating capacity.

Tom received the Pennsylvania Governors Award for Environmental Excellence in 2013 and the Conservation Achievement Award from the Western Slope Conservation Center.