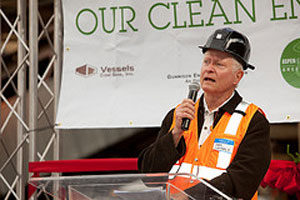 Tom has almost fifty years of experience in the natural gas industry, primarily in upstream natural gas related operations. Under his management VCS has founded and manages companies to capture methane emissions from coal mines with members GDF Suez, Aspen Skiing Company, OXBOW Mining LLC and Gunnison Energy Corporation and others.  In 2003 he became CEO and president of VCS. Prior to that, in 1998 he was an executive director of Energy CG. a seed investor in Alkane Energy Plc (FTSE). Mr. Vessels was the CEO of Vessels Oil and Gas Company from 1985 to 1995. He was Chairman of Colorado State Minerals Energy Policy Advisory Board from 1997 to 2012.  He represents the third generation of his family in the natural resources industry.  His Father Thomas George Vessels founded Vessels Oil and Gas Company in the 1970s and his Grand Father Thomas Eugene Vessels was the first in the energy business to buy, sell and lease mineral interests in Texas.

Mr. Vessels has approximately 24 years of experience in developing coal mine methane projects. The companies VCS manages have captured almost 4.5 billion cubic feet of methane emissions equivalent to 6.6 million emission reductions according to the IPCC AR5 20 year GWP.  VCS has been awarded the Pennsylvania Governor's Environmental Excellence Award and the Conservation Achievement Award from the Western Slope Conservation Center. The award was for conversion of coal mine methane into utility quality natural gas and electricity which runs a conversion facility independent from the grid. VCS developed the first methodology rigorous enough to verify destruction of greenhouse gas emissions from coal mines in the USA. Mr. Vessels gained initial experience in the field of coal mine methane while associated with Alkane, a commercial producer of coal mine methane in the UK and Germany. While President of Vessels Oil and Gas Company, he managed the production, processing and sale of as much as 50,000,000 standard cubic feet per day of natural gas.

Julian has 35 years of experience in the natural resource sector. A mining and mineral process engineer by training, he worked at several underground and surface mines and associated processing facilities before transitioning to the oil and gas sector. As a natural gas facilities and project engineer he designed and managed the implementation of gathering, treating and processing facilities as well as electric power systems. He has also had extensive experience with Rocky Mountain area natural gas basins and natural gas transport infrastructure having worked for Amoco Production Company and K N Energy, Inc.

Mr. Huzyk led the business development efforts for the start-up of the 300 mile long TransColorado pipeline project and successfully brought TransColorado into service, promoting and managing the pipeline through its first two system expansions. Since joining Vessels Carbon Solutions, he has developed and implemented major plant modifications to the Cambria 33 facilities in Pennsylvania and coordinated design and implementation of the 3MW LLC and North Fork Energy facilities at the Elk Creek Mine in Somerset, CO.

Evan has had eight year of experience in Coal Mine Methane Capture working for Vessels Coal Gas.  Evan has experience in emission data collection, gas plant operations, and Renewable Energy Credit (RECs) sales and marketing offset credits.  Evans has been involved in lobbying efforts in Colorado Senate Bill 13-252 that were successful in getting coal mine methane included in the Colorado renewable portfolio standard as well as increasing the renewable portfolio requirements.  Evan is the IT service manager and is the liaison for out of state operations.