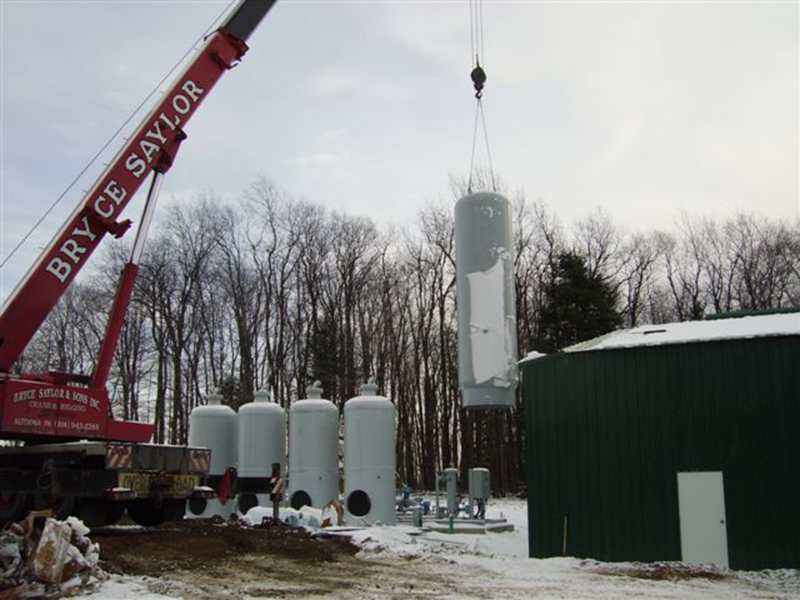 Vessels Carbon Solutions is currently operating a combustor at Cambria 33 and capturing methane emissions equivalent to removing 38,000 cars off the road.

Vessels Coal Gas has operated a facility capturing methane emissions from an abandoned coal mine Beth Energy Slope Mine 33 near Johnstown Pennsylvania since 2008.  The residual coal property is now owned by Arcelor Mittal.  The project was a pilot project and served as a model to develop the Abandoned Mine Methane Protocol of the Verified Carbon Standard1.

Vessels acquired a lease of the methane in 2007 and drilled a well into the mine to capture the methane and sell it into a local distribution pipeline company.

Pipeline injection of methane emissions began in May of 2008. Electrical generation using methane emissions began December 2010.  Natural gas prices plummeted and the gas injection to pipeline ceased at the end of 2014.  The project was converted to a methane capture and combustion project following the California Air Resources Board Cap and Trade System.  By January 1, 2019, the Cambria 33 project has produced the following results:

“Baseline Emissions” is a term that refers to the total methane emissions from the abandoned mine that were measured and recorded as having been captured by the project.  This number is represented in metric tons of CO2 equivalent  (tCO2e).

“Project Emissions” refers to the amount of CO2 emissions created by the methane combustion, which produces CO2 and water, and the small amount of methane that is not combusted.  Cambria 33 Project Emissions are approximately 9.5% of the total Baseline Emissions all stated as tCO2e.

2019 Verification for Report Period 1 in 2018 under ARB begins.
2018 Combustor begins destroying methane emissions.
2015 Gas treating facility shut down due to low gas prices.
2014 Project is converted to ARB from VCS
2010 Verified Carbon Standard approves Cambria 33 as an Abandoned Mine Methane project qualifying for carbon offsets.
2010 Electricity generation facility commissioned to run on methane from the mine 33 to provide power for the gas treating and pipeline injection facility.
2010 Terrapass buys Verified Carbon Units (VCUS)4
2008 Initial finished product gas sales.
2008 Monitoring and recording instruments on placed on F Shaft.
2008 Installation of Molecular Gate Nitrogen Desorption treatment facility adjacent to the People’s Gas Local Distribution Pipeline.
2008 Drilling of a well into the Cambria 33 Mine on top of the Ebensburg Anticline.
2007 F Shaft of Cambria Mine is tested for volume of methane emissions.
2007 Vessels acquired lease right to methane in Cambria 33 coal mine.